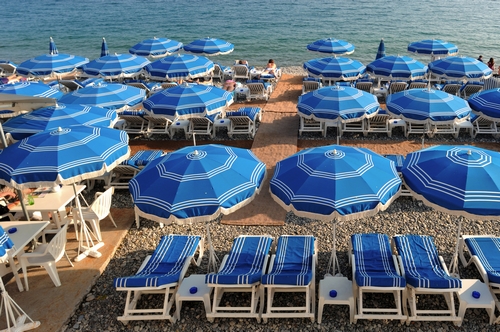 France is one of the greatest holiday countries on the planet. The combination of a great and open culture, gastronomy, beauty, many different landscapes, great climate and central location in Europe make this a country that is loved all over the globe. It attracts 84 million tourists every year, mainly to it's great cities Paris and Lyon and the famous Cote Azur. But the countryside with it's many castles, charming cities and lovely country side keeps attracting more and more tourists every year. France is still a country where you can find hidden away places where you are the only visitor, where time has stood still, where you can stroll in majestic woods that have seen kings and queens pass.

It is also a country of high quality realy estate, where most houses are built with noble materials like natural stone, brick and oak. Prices in the country side are still more than reasonable and you can still find your little dream house to renovate for a interesting price.

France just has it all.

It is administratively divided into 17 regions (French: régions), of which 13 are on mainland France, and four are overseas. Corsica is a territorial collectivity (French: collectivité territoriale), but is considered a region in mainstream usage, and is even shown as such on the INSEE Web site.[1] Each mainland region and Corsica are further subdivided into two to eight departments.

Paris is its capital of course, with Marseille and Lyon as it second and third cities. France has good connections to the rest of Europe and has well kept highways and country roads. You can get to even the smallest village, the road will almost always be well kept. There is a good railway system with the famous French TGV as France's national pride. Several airports (Paris, Lyon, Marseille, Bergerac) and even Geneva in Zwiterland ensure good connections with the rest of the world.

Don't hesitate to have a look around and see what France and our agency has to offer!